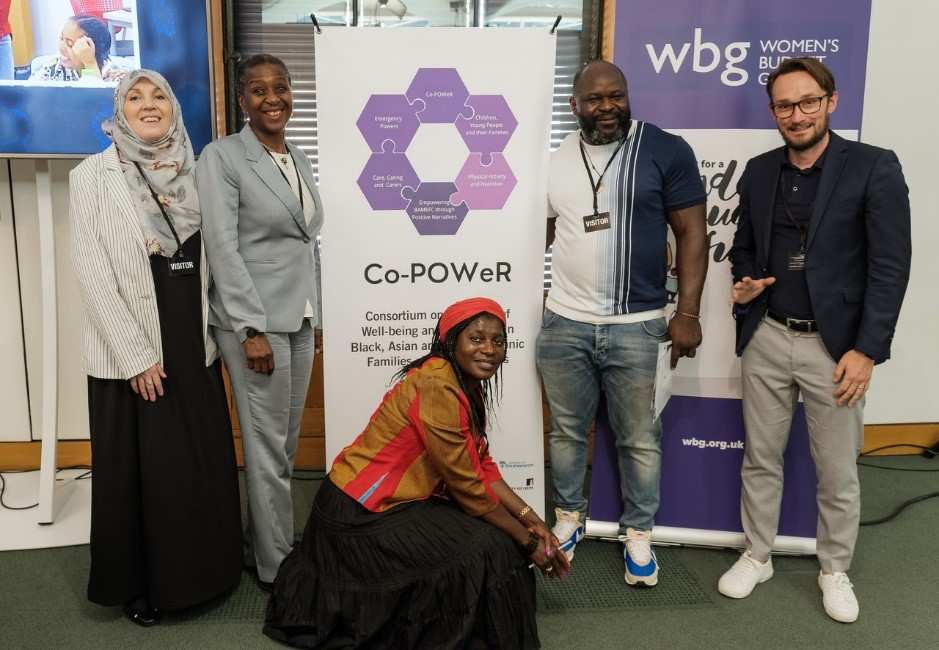 Creative industries researchers who are part of a £2.5m consortium exploring the impact of the pandemic on BAME communities have shown some of their documentary films at an event in Westminster.

Co-POWer, funded by UK Research and Innovation (UKRI) via the Economic and Social Research Council (ESRC), is a group of female professors from nine UK universities. Led by the University of Leeds, the project looks at practices of well-being and resilience in BAME families and communities, who have been particularly impacted by the Covid-19 pandemic.

The project has been investigating this impact through five research streams, based at different institutions. USW’s Co-POWer team, led by Professor Florence Ayisi, has been employing creative practice research methods to produce real stories; co-creating and producing documentary films which highlight the lived experiences of several groups and individuals.

The Co-POWeR conference policy brief launch was held on 15 June at Portcullis House, Westminster, where the project presented its policy recommendations. The event was hosted by Naz Shah, MP for Bradford West, and Annalise Dodds, MP for Oxford, and was attended by Co-POWeR research teams as well as stakeholders, policy influencers, Community Engagement Representatives and third sector organisations.

The USW team presented a 15-minute film (below) showing excerpts from the full-length documentary films currently in postproduction, which was well received and had an emotional impact on several audience members in the room.

The film included incidents of police brutality, wrongful arrests, and the death of an individual due to contact with the police. Attendees were also moved by the way the pandemic has affected diverse communities, including young people and the elderly, as well as the challenges and prejudices experienced by frontline healthcare workers.

Prof Ayisi, who has worked with Research Fellows Dr Wendy Booth and Emyr Jenkins on the project with support from freelance creative artists, presented the policy recommendation for USW’s research stream.

The recommendation is for the provision of creative opportunities for those from BAME families and communities to allow them to fully participate in the creative arts as producers and consumers, by developing creative arts programmes, schemes and facilities that are accessible and inclusive to all ethnic groups and communities.

Prof Ayisi said: “The provision and access to creative arts are essential for the physical, mental and social wellbeing and resilience of all communities. This action will ensure that the arts are used to empower BAME FC through positive narratives, and will improve representation and visibility. Such positive narratives engage and de-stigmatise vulnerable youth, and also promote the vivacity and vitality of civil society.

“The co-creating approach of the Co-PoWeR project has been a gift to research participants who have shared their personal stories of the Covid-19 pandemic through the documentary film form.”

Adam Williams, interim Deputy Dean of the Faculty of Business and Creative Industries at USW, also attended the Westminster event. He said: “This project has highlighted the importance of interdisciplinary collaborative research opportunities. I’m particularly impressed with the synergy between the research streams, and the high level of community engagement activities.

“The USW research team was instrumental in linking diverse communities, groups, and individuals to the other work packages for conducting several focus group interviews and discussions. They reached out to diverse communities to conduct fieldwork research to ensure that the direct and unique experiences, and stories of BAME families and communities, were obtained to underpin the policy recommendations that have been presented.”

The USW Co-POWeR team are currently planning ways to disseminate the key project outputs and exploring diverse strategies for further activities, so that the research can be taken forward. It is hoped that the creative outputs of Co-POWeR can be shown to public service professionals as part of decolonising the curriculum and supporting an anti-racist agenda.

Ofcom appoints USW Professor Ruth McElroy to its Content Board

The time is now for a skills action plan to serve all of Wales, says report

51 years without Coco. What’s going on with Chanel?